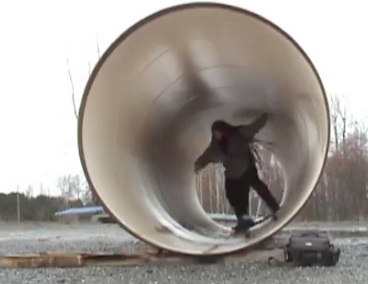 Another old Teaser Video made pretty much to play around editing. This one has the heart of the old Team Protest in it, myself Hippie Mike, Cisco Gooding, Jeff Cole, Brad Danyluk and Jon Irvine, along with some lines from my long time filmer Justin James, or “Numb-Nuts” as I call him. The only one missing from that era of Protest is Carrie Williams. I’d say this video was from around 2005 or 2006, close to the time when Never Give Up!! was released.

The entire video is in slow motion, even the tiny full pipe, which was soaking wet by the way and very slick.

Nothing too special in this Teaser, just a bunch of dudes having fun and doing weird tricks