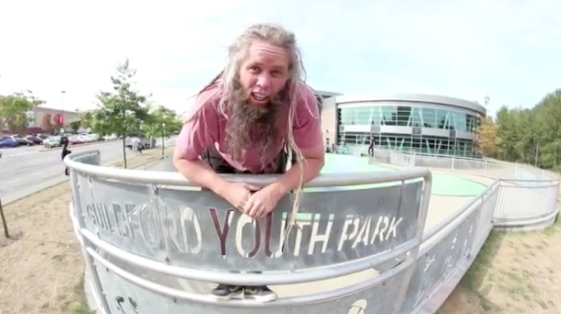 It was the first closed in bowl with coping in Surrey, and when it was in the planning stage for the Guildford Park I was very adamant that we got a Bowl. There was too much of the same street stuff popping up everywhere and those parks get boring after a while. So Guildford Bowl was built, along with a tiny, somewhat pointless Street Section. Of course now you have to be thankful for the street section because that’s all that will be skateable for the next year and a half until the construction is complete. Once this Lap Pool is built then New Line will come back and build something fresh for us to ride in the remaining footage between the building and street section.

This Park helped to teach a lot of the young kids in Surrey how to hit coping. I remember when it was new and at my Hippie Mike’s Tour de Surrey Contests there the young kids would all avoid the Bowl and just ride the street stuff, and now almost everyone focuses completely on the Bowl at those events. It also created a group of friends that localized that place, Allen Handley, Myke Johnson and Randy. These guys all know how to shred this spot. It’s a shame that we’re losing it, but life goes on.

I’m not completely sure when the fence will go up and the Bowl will come down but it could happen at any given moment, so take your chances and get there for one last session