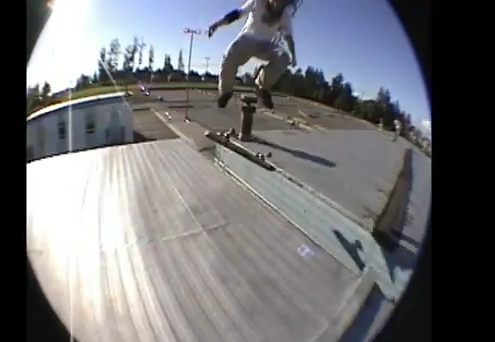 I built it to prove to the kids I was teaching that you can balance on anything. But I made the mistake of taking it down to Bear Creek Skate Park the evening I put it together and realized that I could actually skate it. I even did a kickflip off the bank launch on it that first day. It was gonna be trouble…

I started skating this thing all the time. I kept it in my trunk and pulled it out whenever I thought of something to try. I let the kids ride it every Friday at the Skateboard Camps I was running and they all thought it was awesome. All it was, was just a straight up 2×4 – 36” long, gripped on top and sitting on original Gullwing Pros and Powell Peralta Mini Rats. It’s in my laundry room right now, just waiting for another ride. I think the last trick I ever did on it was a switch blunt – indy out on my ramp, or maybe it was the jitterbug. Either way it’s been a year or two.

We had some good times, me and that 2×4 – kickflipped a roof gap on some portables, pop-shovits, manuals and boardslides, all kinds of craziness. I still remember early grabbing the 10 stair at Brookswood Skate Park on it and everyone going wild. One time I showed up at Brookswood for a contest in 2005 and I only brought my 2×4. 75% of the people there didn’t even know it existed, but they’ll never forget it after that day:

First run, I threw down a solid line to start, Kickflip on flat, then a big pop shovit, and then boardslide down the 4 stair kink rail; turned around and blunt transferred over the spine in the bowl to a 50-50 and then a rock fakie; jumped out of the bowl, cleared the path and early grabbed the 10 stair… Killed it!

Second run, started off with the same line, then went back and forth in the flat banks with a kickflip fakie, a fakie kickflip and then pop-shovit body varial; and of course, one more early grab off the 10 stair.

The crowd loved it, and somehow I got 4th place. Nice! I didn’t do it to win, I just did it for the fun, and I was stoked that I had 2 flawless runs.

I was filming way out in Aldergrove Skate Park about a month ago for my “Show UP Mike” contest and this kid showed up and the first thing he said to me was, “Hey, did you used to ride a 2×4? I remember you from a contest at Brookswood.” I just laughed. Good times.

Another great one was this Volcom – Wild in the Parks thing at Tsawwassen Skate Park in 2006. I had ridden my 2×4 at Tsawwassen so many times it was basic. I kickflipped up the step up no problem, early grabbed both sets with different grabs, and some other stuff, but this was a day for historic moments so I decided I was going to boardslide the Blue Rail down the 6 stair. Anyone that knows me knows that I don’t ride rails any more, but here I was hopping on to this handrail on my 2×4 and making it. So I stuck it down, Blam!! I had never even attempted to boardslide this rail on my normal board, so I have to admit I was pretty stoked that I just did it on a 2×4, maybe a little toooooo stoked. I stuck it down again for my video camera so I could watch it myself, and then I talked shit: “Joyce Rail, tomorrow. It’s goin’ down.” Any locals to the Lower Mainland should know the Joyce Rail – long green 6 stair rails, fairly high, out of a tennis court and you need plywood to land on. About 12 of us went out the next day for me to do this boardslide.

First try, got on it and jumped off;

Second try, slid the whole rail and jumped off;

Third try, came up strong, full commitment, knowing I was going to land it…

I clipped my front wheels on the bottom of the rail, leaped over the rail trying to clear it and caught my inner thigh on the end. Smash! Faceplant.

It took me 3-4 weeks to massage out this blood clot trying to form in my leg, but it was worth it. I was getting way to cocky with that 2×4 board and needed a good dose of reality as to why I should not be riding it.

The 2×4 skateboard was built to prove a point to kids, but instead it ended up proving a lot about skateboarding to myself. I learned that I can ride anything and still rip it. It helped me express my inner self and I realized that this board would push my limits to another level, and I thank every day I got on it, and every trick I did. I’m sure someday it will rise again, but can’t say when.

Until then, enjoy what might just be the strangest skateboard video part you ever see:

To the song “This Was My Life” by Megadeath