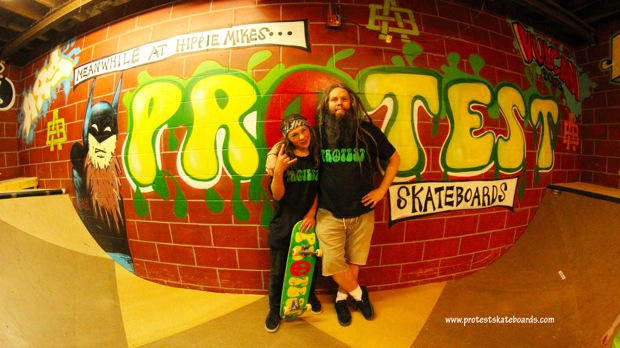 I said it just about a month ago, is Merrick Orr the next David Gonzales? And when I said it, what I meant was, Damn this kid is such a shredder with awesome aggression in his skateboarding and with the right push he could be a household name one day. Merrick resides in Sooke, BC on Vancouver Island and skates hard as much as he can. He skates fast, with no pivot cups in his trucks, and he stays on his board no matter what. At a mere 14 years old he has serious potential to get a ton of amazing footage and we are stoked to be the ones showcasing it. From the first moment I saw this kid I was in awe and knew that I would know him for a long time. After some back and forth conversation Merrick decided to join the team of Protest and follow us along on the positive journey of skateboarding and mentorship that we are about to embark on. He came over to the mainland a few days ago and we took a few hours to skate the brand new indoor Protest Ramp together and film this part. Like usual, Merrick showed up with a vengeance to shred, and did just that blowing away everyone that was there. We are proud to welcome him onto the Protest Skateboards Team and this video will show you why.

Welcome to the Team Merrick – Protest for Life!