Damn, I got Shown Up… 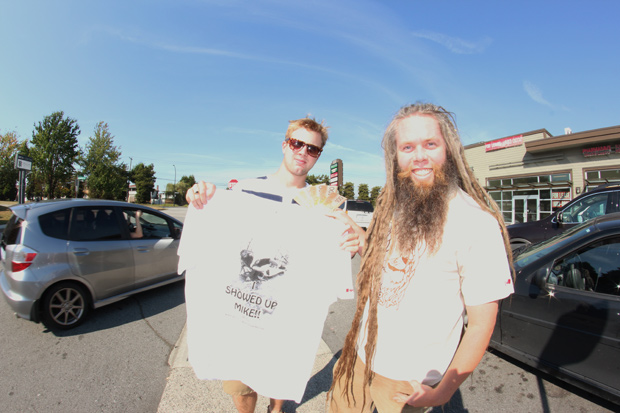 3 solid months the Show Up Mike contest ran for, and there was definitely times where a lot of people were on the site to vote. September 11th, ironically, was Judgement Day and the man with the most votes at 305, was Sean Lowe.

Sean only entered the one video filmed at Kensington Skate Park, but it was all he needed. With some super technical talents he wowed the voters into checking out his vid and pushing the Thumb’s Up button. I met up with Sean on a busy street corner to hand over the prize money and get his opinion of how the contest went and what winning the $500 felt like.

Hippie Mike: First off Sean, congratulations! How does it feel to finally win the Grand Prize after all this time of wondering?

Sean Lowe: Feels good, have to have a little celebration tonight.

HM: What did you think about the Show Up Mike Contest overall?

HM: How did you hear about the contest and what made you enter?

Sean: Well I saw you at Centre Distribution when I was picking some stuff up there, and I don’t know, who doesn’t like money, really? So that’s pretty much how it went down.

HM: If there was another version next year, would you enter it again?

Sean: Yeah I’d be down for sure, yeah it was fun. I enjoyed it, got to hang out for a day and skate, that’s always fun. And yeah for sure I think I’d do it again.

HM: Well thanks for entering this year Sean and Congratulations again and have fun with that 500 bucks

Sean: Oh you can believe I will (laughs)….