A first for Canada – A skateboard/youth park which had a covered area built over a portion of it. This will be a revolutionary guideline for the parks of the future. We create these places for the children and youth of today to go out and be active, but the weather can definitely be a factor. Finally, a place we can go to skateboard, bike, blade or just hang out during the rainy season without having to leave Surrey. And for all those who don’t live in Surrey, it’s just a skytrain ride away. 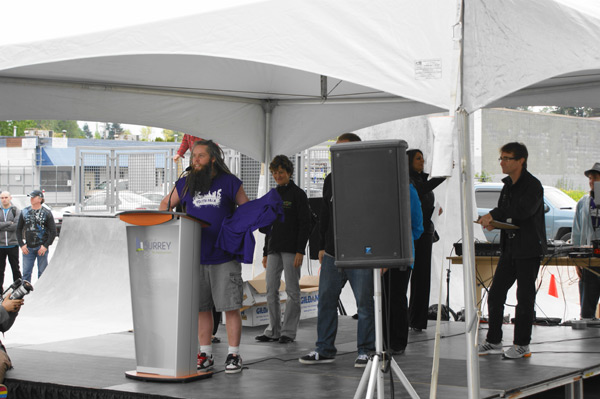 Located right near Gateway Station beside the Chuck Bailey Recreation Centre, this new Youth Park will be busy forever.

The plan was cemented for this park to be constructed in February 2010. Some delays occurred, but construction did begin early 2011 and the Grand Opening date was chosen – May 28th. As time drew closer some people were worried that the park was not going to be ready by this time, but I always had faith in New Line to have it done. I would always just say,”It’ll be ready…”, and it was. The construction fence was taken down on the 27th, and literally within a couple hours, the place was jumping with 50-100 people who all had nothing but positive remarks. My opinion of the park – “The best outdoor skate/youth park in the Lower Mainland/Fraser Valley.” With the covered area, it will always be used, but the best part is how unique everything else in the park is. New Line went all out with their design team and created many obstacles that you will not find in any other skate park, including custom formed rocks built right out of the transition of the quarter pipes. There is something for everyone to keep them excited to venture to this facility for years to come. 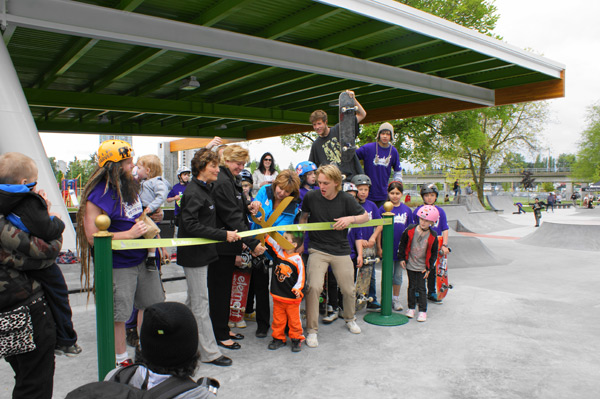 The Grand Opening day was perfect, a little cloudy but no rain. I would have to say close to 500 people around, 300 being skateboarders, bikers, and rollerbladers. We had plenty of indoor events happening, and 3 different demonstrations – The Surrey BBoys break dancers, Bioulles BMX Demo, and the Kevin Harris Freestyle Skate Demo which wowed the entire crowd. Kevin brought Kai Dunkel, a 22 year old up-and-comer form Germany, and Ryan Brynelson, a 19 year old local from right here in North Delta, both extremely skilled at this rare style of skateboarding. But of course no one can touch the level of expertise the Kevin brings to the surface with 35 years of experience. He blew people’s minds, and taught them history on the microphone all at once. Check out the demo on You Tube. 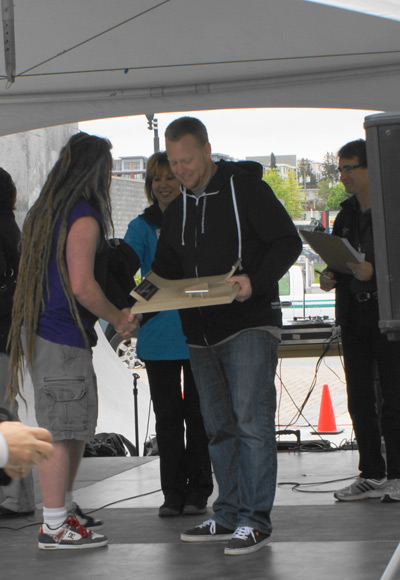 Councillor Mary Martin and Surrey Mayor Dianne Watts both made great speeches in regards to how awesome this park is. And one more amazing fact is that this is one of the first skate parks ever built where there was no real fundraising. Built completely by the City of Surrey, with 1/3 of the money funded by the Federal Government, it is yet another revolutionary step made by the City of Surrey for other cities to follow. Surrey is the City of Parks, and is always creating more and more places to try to get all people outside being active and enjoying their surroundings in positive ways. We are always looking towards the future, and in skateboarding, the City of Surrey is definitely a leader for all other cities to follow in our footsteps. With 8 skateboard/youth parks it is the highest number of parks per capita in Canada. Thanks Dianne!! 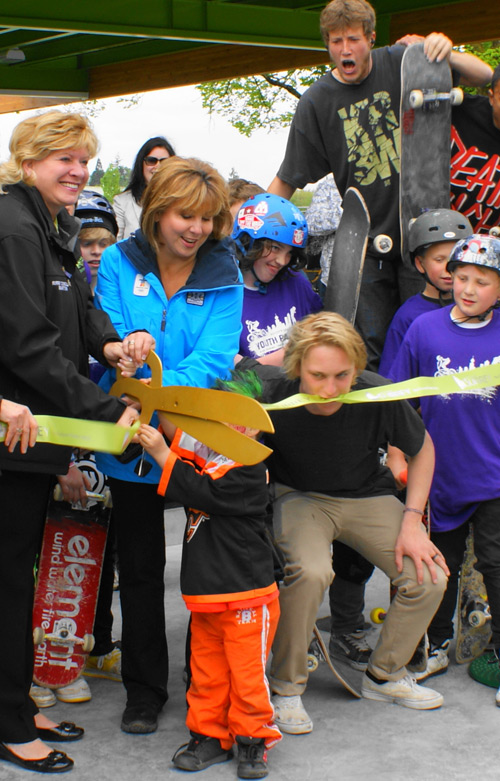 There were tons of kids enjoying the new park this day of the Grand Opening, and lots were competing in the “Best Trick Contests” and plenty of prizes were handed out. It’s a great park and I can’t wait to add it to my list of parks for competitions and special events.

Thanks to everyone that was involved in planning, sponsoring and working at this event. And thanks to all who came out.